I admit I no longer know what traditional fasting is, as meat is rarely on my menu, although admittedly my stomach still misses it. At least this is what it tells me, but I just brush the cravings aside. I do not like to give things up, as after the powerful experience I had with my child, I not only had to give up many things, but also to deal with the pain of a bleeding heart. The days before Easter, which used to be spent without food (yes, that is true fasting), were not as full of suffering as the weeks after her birth or as full of torment as the minutes when she stops breathing. On Maundy Thursday I have not washed my brothers’ feet for many years, as I take care of the feet of equally desperate souls to whom a special child was born; there I can be of help. I kiss the cross when I hug my darling. Years ago, a doctor told me he had tragic news for me, while nowadays any casual observer might mutter to me that my cross is actually my second child.

Everyone has their cross to bear, but I do not wear my crosses around my thin neck. Nor do I glorify them, since they are not persons, nor the great person called Jesus. He carries me. Beside him, there is Mary Magdalene, with whose way of thinking I can identify the most. And his mother Mary comes to me when I say I cannot take it any more, when it is so hard that I drop to my knees. These words remind me how a few years ago in our living room I dropped to my knees and pleaded for help. Either from these gentle souls or from extraterrestrials that do charity work. I pleaded for someone to help me, although in the lonely nights I had already realised that I am here alone. When I close my eyes, when I go to bed, or in my first waking minutes. I carry my pain alone, even when another person hugs me. I nurture my suffering, even when the one beside me caresses me. I always wanted to attend a silent spiritual retreat led by Father Kejžar, of whom I am very fond; it was more than just five days of everyday life in silence, it was also the silent absence of thought, since desperation was too strong. If in the past I stayed awake for Easter Vigil, awaiting His Resurrection, today I wish night would bring more sleep. I no longer wait, as she awakens me after an hour of sleep and then again, and again at the break of dawn, when I think only of morning and the prospect of her quietly murmuring her morning prayer, which would finally afford me some sleep.

I no longer practise the blessing of the Easter baskets and the triple Sign of the Cross. I have become less patronising when it comes to fellow human beings, I do not judge as harshly as I used to when I was more Catholic than the Pope.

It makes me feel ashamed when I remember how I used to preach at my parents and everyone around me. Sure, my husband received the remaining sacraments just before the wedding, since he had had a quarrel with the parish priest in second grade; however, he is more than proud of his godmother Monika. A few years ago, he told me he can connect with her the most because she is a woman of cheerful spirit, which Christians so often praise in the written word only. I will not talk about periods of chastity because my husband would just shake his head, although I do admit I was more than happy with it before our ‘I DO’. How this would be today no longer matters. Even if there are no past and future lives, I know why I chose him , and why Sofia chose us in a somewhat special form. In Tuscany it was all made clear to us, including the fact that I like to attend Mass and that I feel a special connection with nuns. 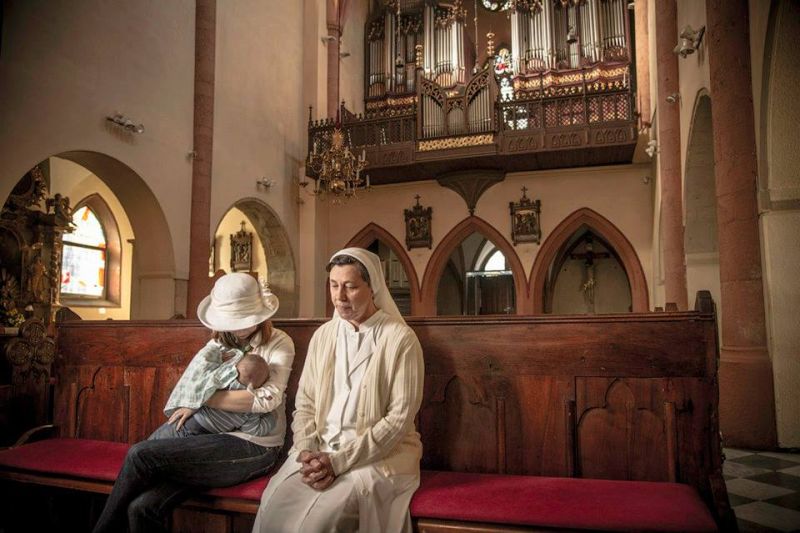 I have not been to confession since forever, for I am a regular visitor at my psychologist’s. Maybe I would prefer to confess to a priestess, with whom I could more easily connect because of her gender. On Tuesdays I attend mediation and Sundays I attend Mass, but if I sometimes do not, I no longer believe I will then be denied a blessed coming week. I have already breastfed in the cathedral, the kids crawl over the carpets before the side altars, Sofia vomits whenever she feels like it and we prefer to be before the grave of Blessed Anton Martin Slomšek. Even as a small child, Sinja would polish it with a cloth, she had her own sermon when everyone was silent, and now Lev and she play tag around the beautiful altar while I listen to the Mass and sing the hymns. Because of the disapproving looks of old ladies, I have already suggested soundproofing. I have also thought of bringing a cushion from home so that the children could play during the service, but we have not yet done so. A few years ago, a nun I am very fond of told me that children should be raised at home, not within the walls of institutions, and now I am completely at peace when my children acquire faith the Greiners’ way, which above all values hope and unconditional love. When they grow up, they can flaunt whatever faiths they want and completely reject their Christian roots if they feel like it; still I remain at peace in the evenings as we recite Now I Lay Me Down to Sleep.

I enjoyed attending religious instruction, and I would enthusiastically sing and light candles for my future husband on every pilgrimage. I have tortured Anthony of Padua with my constant wish for him to appear before me on the day when this husband-to-be appeared. At that time I underwent serious re-education within the community that I am no longer part of. Today I wish churches would contain the heart of red tents and wise goddesses. That they would welcome in their midst a mixture of the same and different sexual orientations. Why do we have to divide ourselves into groups? For quite honestly, I would not like it if I was excluded because I like men and, yes, I know this is natural, but love itself is just as natural if not more. To love a fellow person not just when you shake hands as a sign of peace, but also love them in how different they are. Deep respect even when you completely disagree with me, when, instead of opposing me, you love me. In church, let us offer the divorced, who used to be left outside, the front pews, as they have wounds to heal. Let us also offer these seats to the rainbow-coloured people, who in their loneliness often feel rejected by the ‘normal world’. And to thieves and liars who have made their penance, and to all the Mary Magdalenes who only want to love!

At the crossroads of all faiths I say I am my mother’s daughter, in the company of spirituality I whisper I believe in myself, and when my final hour comes, I am certain, I will regret nothing. For my God has a big, rainbow-coloured heart!

Author: Petra Greiner, mother of three, wife, physiotherapist, but when she goes to bed in the evening, she is her own person.  The birth of her special-needs second child Sofia prompted her to found Institute 13, which seeks to raise awareness of differences and helps not just mothers of special-needs children but whole families.

Note: A slightly longer Slovene version was originally posted on the Institute 13 blog.