In October, the analysis of selected television current affairs programmes showed the following results: the most opportunities to voice their opinion were given to female experts on Epilog (44%) and the least on the programmes Svet and TV Klub (14%). We have been monitoring the ratio of male and female guests on TV programmes since May 2014 and discovered that it has never reached such a high rate of female guest appearances on selected programmes as in October (28%). Previously it peaked at 22%. 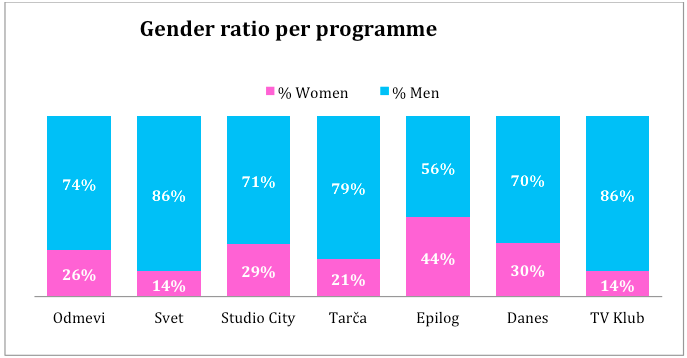 Epilog is a current affairs programme hosted by Maja Sodja. It airs every Thursday evening and covers different topics such as “politics, research, the economy, society and technology. Viewers can watch studio debates, investigative reports and personal interviews. In the studio and in the field. The common thread to all stories is reaching an epilogue.” Based on the data gathered and analysed by our sponsor and partner in the Meta Girls Project, Kliping d.o.o., Company for Media Monitoring and Analysis, Epilog hosted sixteen guests in total, seven of which were female experts.

In October, when the spotlight was on the local elections and the well-known male candidates going head to head in Maribor and Piran, the least studio time was given to female experts on the current affairs programmes Svet and TV Klub. The graph below shows how much time on each programme was given to male speakers (blue) and how much to female speakers (pink). The ratio is similar to that regarding broadcasts by gender, where the lowest percentage was recorded for TV Klub and Svet, and the highest for Epilog, amounting to 76% of male guests and 24% of female guests. 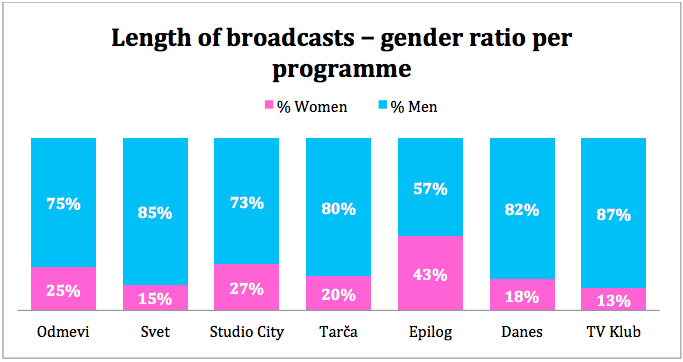 The total number of broadcasts or guest appearances by gender on all current affairs programmes indicates that, counting from May when the first analysis was carried out, October was the month with the most balanced gender ratio so far: 72% men and 28% women. 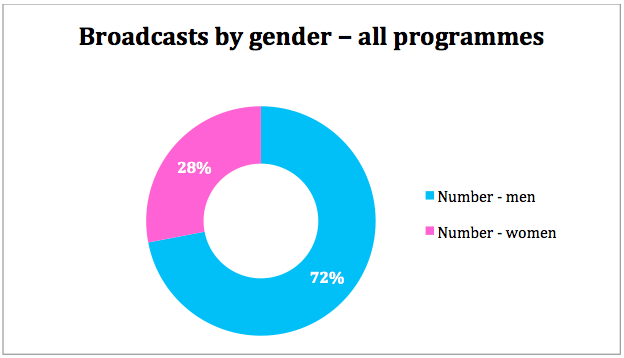 Debates, which fall under the society category, were most frequently aired on selected TV programmes in October, followed by local policy, culture, world news and the economy. 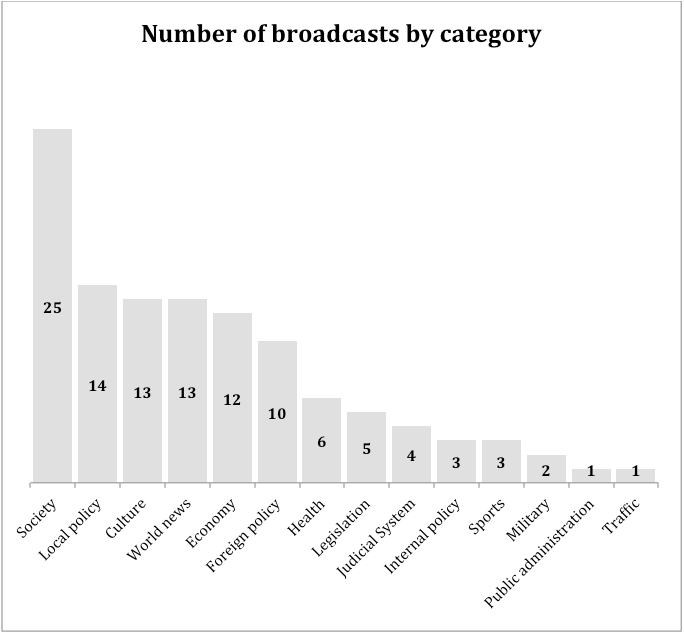 The answer to the question which category-related issues were most frequently addressed to men and which to women is revealed in the graph below. Health (the Ebola virus, vaccination, the medical treatment of children, patient rights) was mostly covered by female experts, as was foreign policy (the European Commission, the candidacy of Alenka Bratušek and the hearing of Violeta Bulc), while male experts more often answered questions regarding local policy (local elections, the pre-election confrontation of candidates in Maribor and Piran), legislation (the mandate of Janez Janša, public spending cuts, government austerity measures), the economy (currency risks, Unit 6 of the Šoštanj Power Plant, stress tests) and the judicial system, sports, military, public administration and traffic. 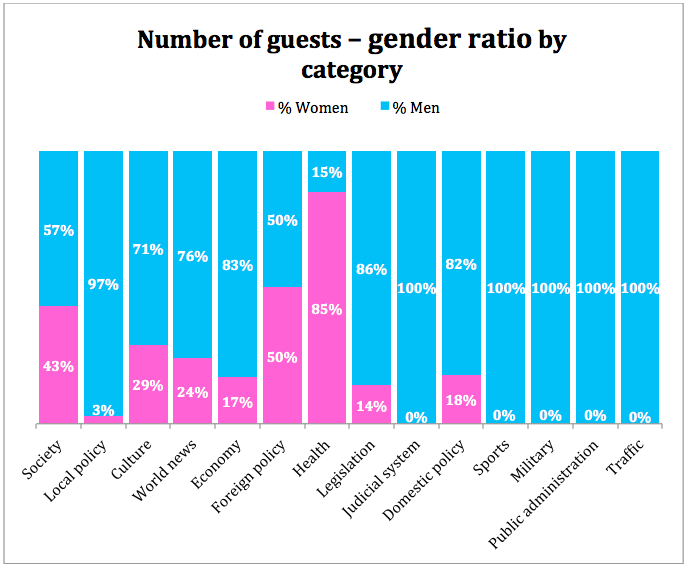 When we created Meta Girls – the section of Meta’s List founded in the belief that women are made for politics and politics is made for all – we envisioned conducting several analyses that would help us understand predominant patterns and social trends, especially when it comes to the presence of women in the traditional media. We are fed up with the empty debates on gender equality and equal rights held for petty International Women’s Day events. We want to see real change. This is why we decided to examine how the media help sustain or break stereotypes, i.e. how much air-time is given to men and to women.

We have joined forces with Kliping, Society for Media Monitoring and Analysis, which is a sponsor and partner of the Meta Girls project. Every month we monitor seven (7) of the most watched current affairs programmes on Slovene television (Odmevi, Studio City, Tarča, Na tretjem, Danes na Planet TV, TV klub, Epilog, and Svet (Kanal A) and note the amount of air-time that is given to male and female experts. We also analyse the questions they are most frequently asked.